My Mom and I have been sewing up a storm while Little K and I have been visiting her in Pennsylvania. I brought some of my fabric stash with me, along with my favorite patterns, hoping to get some sewing projects completed. I'm happy to say, we've accomplished a lot.

It's amazing how quickly the sewing goes when you have two people working on the same project, not to mention that my mother is much better than I am. I have to admit, she did all of the actual sewing, but I was there to cut out the patterns, pin, iron and chose the fabrics and notions, so I'll take some of the credit.

This Twirl Skirt was made using the Redondo pattern.

I've used this pattern before, but never in the "plain" version. Previously I added ruffles to the bottom, and for another skirt, I added ruffles along the vertical spiral seams. I love how many ways to can modify this one pattern. When you are not adding any ruffles, it goes fairly quickly. Plus, this pattern is great for me because I can never choose just ONE favorite fabric, and this allows me to use up to 5. The bottom edge is finished off with bias tape.

I think every little girl can't help but smile when they are "twirling" in a Twirl Skirt, and Little K is no exception. She loves it.
4 comments:

Email ThisBlogThis!Share to TwitterShare to FacebookShare to Pinterest
Categories: Sewing

This is card number THREE for your consideration in our Friendly Family Card Making Competition. Sketch #125 was used from Card Positioning Systems. 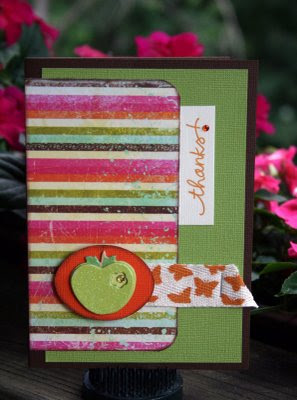 We'll be determining the winner based on most number of posts. Thanks for Commenting.
No comments:

This is card number TWO for your consideration in our Friendly Family Card Making Competition. It's a Birthday card for my Sister in Law (Lisa). Sketch #125 was used from Card Positioning Systems. 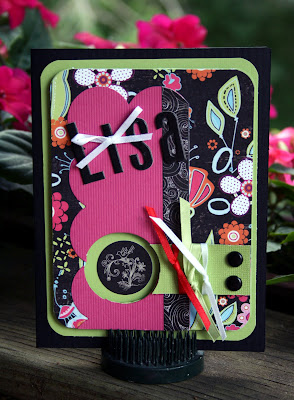 There is a cut out detail that reveals an image on the inside of the card. 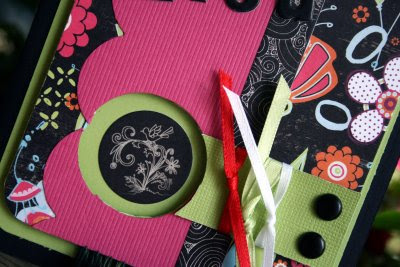 We'll be determining the winner based on most number of posts.
1 comment:

Here is the first card for your consideration in our Friendly Family Card Making Competition. Sketch #125 was used from Card Positioning Systems. 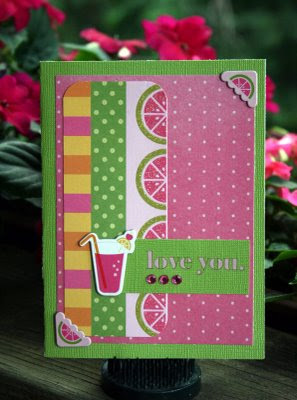 We'll be determining the winner based on most number of posts. I think there may be an ice cream cone at stake - so don't be afraid to comment often.
3 comments:

My Mom, Daughter and I decided to have a friendly little Card Making Challenge. We each made a card following this weeks sketch at Card Positioning Systems.

We have very different design styles, but it was interesting to see if that came across when we used the same sketch for inspiration. 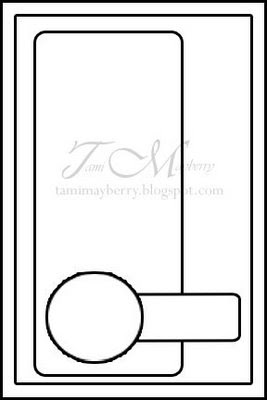 Check out the next 3 posts here, here and here to see if you can figure out which card was done by Me (Karina), my Mom (M) or my daughter (Little K).

Most of the papers and embellishments used are from a scrapbook class we took together earlier this week, so we can't really take credit for the color combinations.

Feel free to leave a comment. We decided the card with the most comments would be the "Winner", although the prize has not yet been agreed on, so let us know if you have any suggestions for the winning prize!
No comments:

Everyone Should Have Fresh Flowers

I used to buy myself Fresh Flowers at least once a week.

Then somehow I just got too busy, and that went by the wayside along with so many other things (Going to the Gym, Meal Planning, Date Night, doing the Laundry on a regular basis...OK, maybe I never did that last one).

The truth is, you make time for things that you find important...and I think flowers should be one of them! 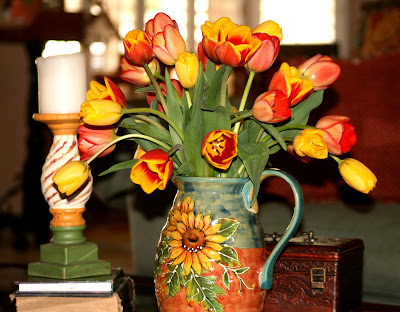 It's a simple little pleasure, that doesn't cost a lot...they just make me happy.

It's my turn to make a card using this weeks Sketch #123 at Card Positioning Systems. I was using papers that were already on my desk from another project, and only had one large sheet of brown Cardstock - it wasn't quite large enough to make the card square like the sketch, but the layout is the same. 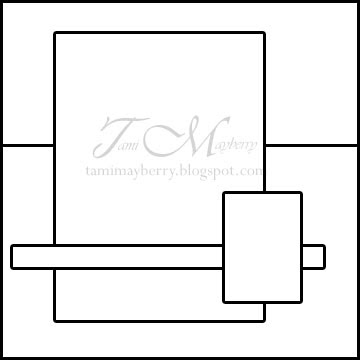 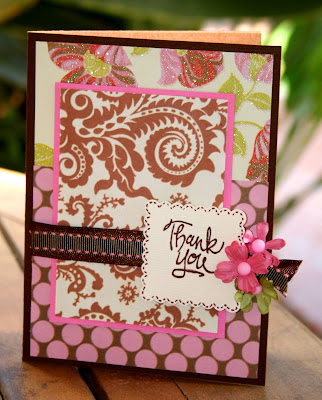 Little K made this card as a Thank You for her Summer Dance instructor (Miss Sharon).

The Challenge for the week at The Pink Elephant was to use your Favorite Colors. For Little K that's Pink, Blue and Green. She also followed Sketch #123 at Card Positioning Systems. 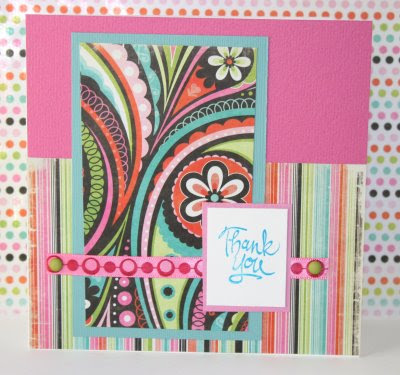 I've got some card making competition in that little girl of mine. She's Pretty Good, don't you think?
5 comments:

We're not usually home on the 4th of July. For the past 10 years at least, we have been in Pennsylvania visiting with our families, but this year we are heading over a little later in the summer so we spent Independence Day this year at home in Mesa Arizona.

I took these photo's at 5:00pm. The air temp was almost 100 degrees (in the shade), and the pool water temp was just about the same. The pool was actually only 92 degrees, but in the few minutes it took me to take the photo, the sun warmed up the thermometer. 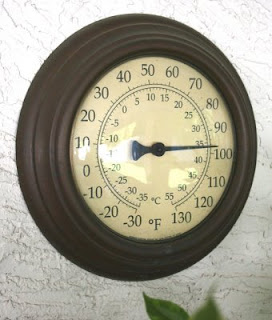 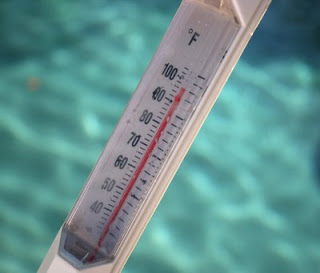 Hummm - maybe that's why we are always in Pennsylvania by now?

I didn't really plan anything. Hubby had to work, so we just played at the pool when he got home in the afternoon. Little K and I took a quick trip to...you guessed it...Walmart, to pick up a few supplies.

I think our little 4th of July Family Get Together turned out pretty good even without much advanced planning. 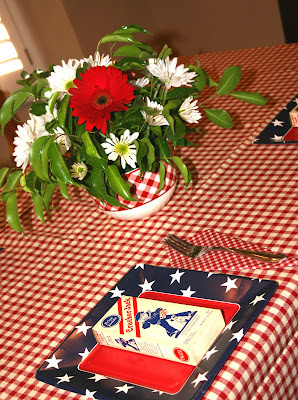 A bunch of White Daisies and Gerberas arranged in a bowl with some cuttings from a Ficus tree made fore a simple Patriotic Centerpiece. 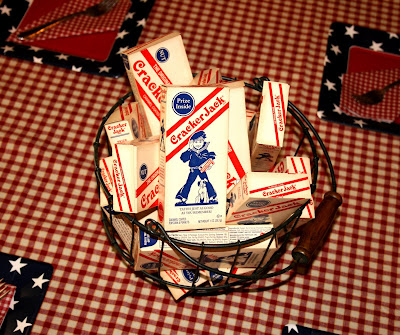 I found these boxes of Cracker Jack at Walmart a few weeks ago and picked up a bunch. They were only a little more than $1.00 for a group of 3. I loved the vintage colored boxes and thought they would look good on the table, but it was a bit too much red and not enough contrast. 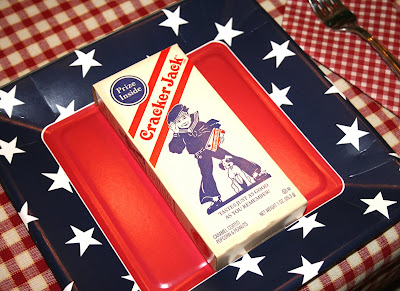 So I moved them to the plates, they look much better here. I think they were only available for a limited time, so I made everyone open them from the bottom and save the empty boxes so I can use them for decorations again later.

Believe it or not, my family didn't even bat an eye at my request - as strange as it sounds, it's kind of normal for me - I guess they are used to me. I'm Lucky to have them. 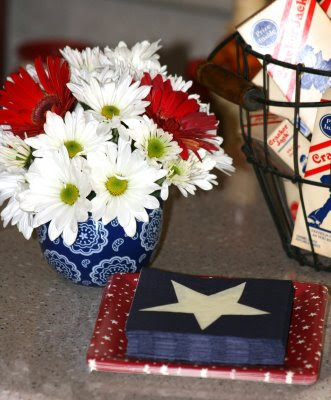 The rest of the flowers in another bowl beside the desert plates just waiting to be used. 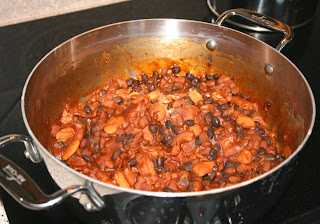 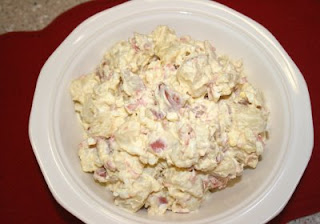 We cooked Hot Dogs and Brats on the grill. I made Jo Ellen's Baked Beans (sort of) and Mom's Potato Salad (kind of). I may have been missing a few ingredients, but I think they came close. Recipes are below. 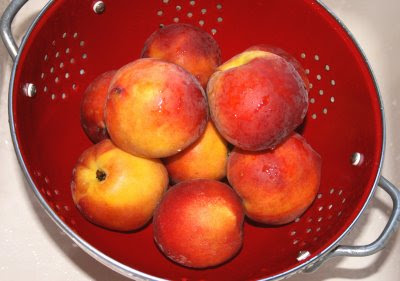 I planned on making Peach Pie, but was running out of time and didn't want to miss out on my swimming time. May be the peaches will make it into desert another day.

Instead we attempted Home Made Ice Cream. I bought this nifty Electric Ice Cream Maker from Rival that doesn't require Ice or Rock Salt. You just freeze the bottom container (filled with coolant), add the milk and sugar and let it rip. 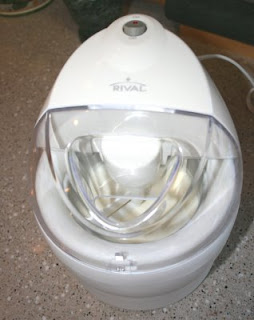 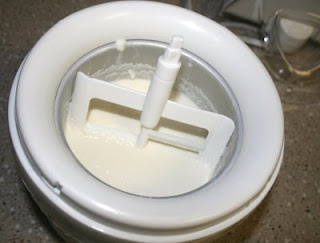 I wouldn't say it was a huge success. When they say to freeze the container for 13 hours before using it, they really mean it. Ours turned out more like milkshakes. We were only able to freeze it for about 9 hours, so I'm not giving up on it yet. I'll try again following the directions (darn - I hate it when I have to do that) and keep you posted.

Did I mention Walmart is right across the street? I'm thinking it would just be easier to go buy some ice cream, but for some reason making it at home sounded like more fun.

We had a great time relaxing with just our family of 3. How did you spend your Holiday Weekend?

In medium bowl, stir together all ingredients except potatoes to make dressing. Pour dressing over potatoes in large bowl and toss to coat well. Refrigerate for at least 4 hours.

Start with a Large Can of Baked Beans (your favorite brand and flavor). Add to that at least two additional cans of other beans (drained). Butter Beans, Black Beans, Kidney Beans even Garbanzo Beans (I love saying that word - he he), they all work well.

Cut bacon into chunks and cook until crisp. Remove bacon from pan and drain on paper towel. Cook chopped onions in some of reserved bacon fat until soft and translucent.

Mix ketchup, prepared mustard and brown sugar together and add to bean mixture. I also add a few drops of liquid smoke.

Cook in crock pot until heated through (or in the oven).

Sorry - no measurements on this one. Adjust quantities based on your individual liking. For me, it's lots of bacon, not too much onion and I like the sauce kind of tart (more mustard) than sweet (less sugar).

It looks really beautiful with all the different sizes and colors of beans (well, at least as beautiful as a bunch of beans can look).

This is where we will be spending the weekend. Relaxing by the pool. 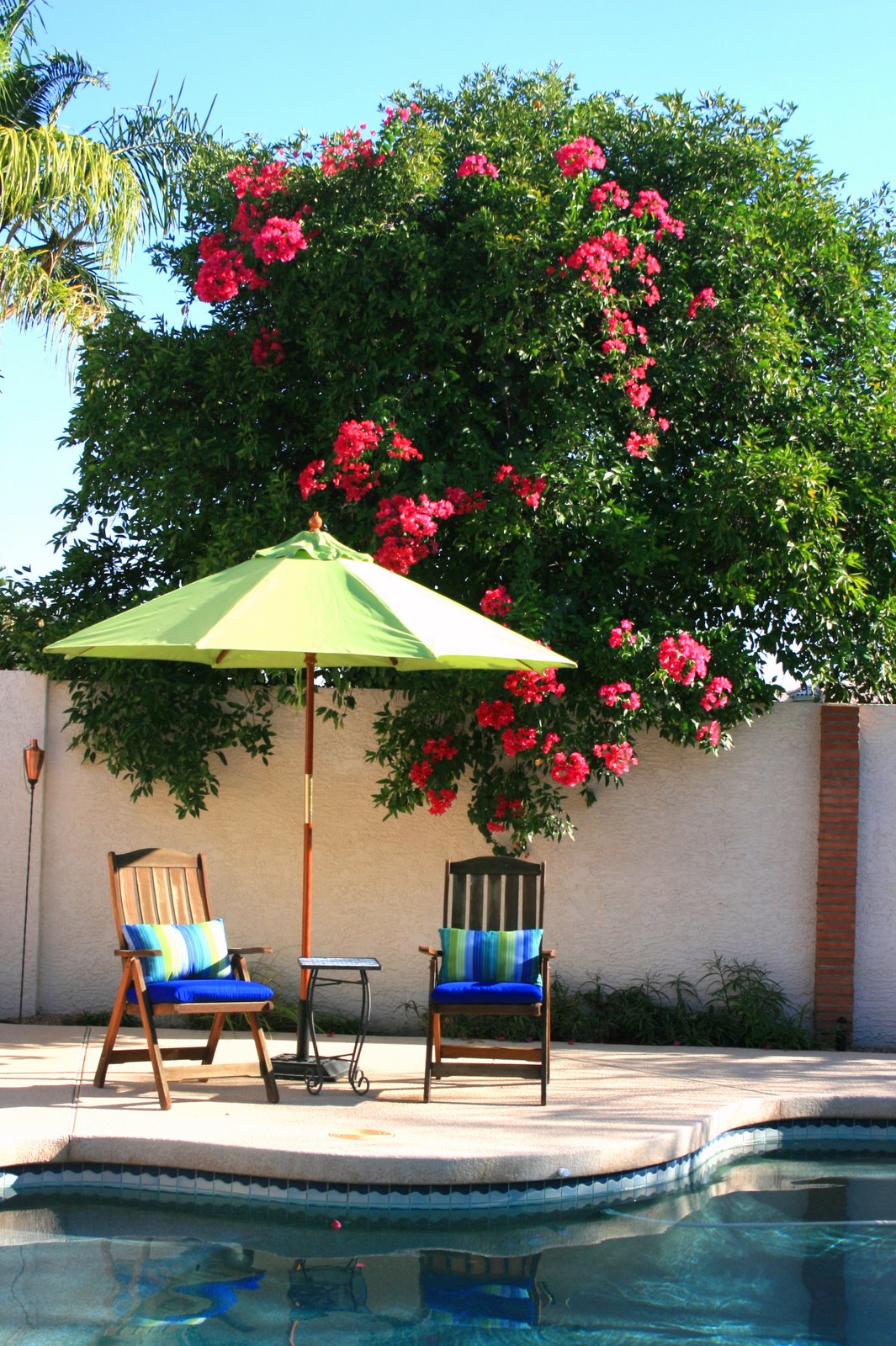 That's one of our Orange trees gently cascading over the edge of the wall. There is a Bougainvillea planted directly beneath the Orange tree on the other side of the wall. Not the ideal spot for a plant that requires a lot of sun to bloom, but it was there when we bought the house and I just never did anything with it. Although it never bloomed, or got very big, the leaves were always nice and green (which you come to appreciate when you live in a desert climate).
When I began pruning this spring, I noticed that a few of the Bougainvillea branches were growing up into the Orange tree. I decided to leave them to see what would happen. Once the branches reached the sun, they began to bloom and grow like crazy, right up through the tree. 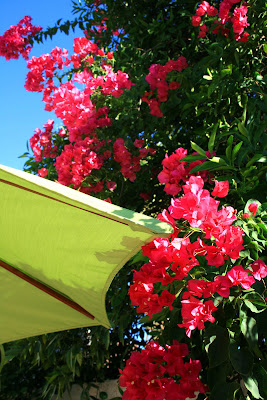 Now we get to sit back and just enjoy the view.
3 comments:

Email ThisBlogThis!Share to TwitterShare to FacebookShare to Pinterest
Categories: Gardening

Sweet Man of Mine

Look what my dear hubby did while we were away for the weekend. 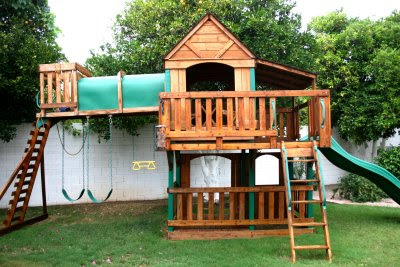 He sealed the playhouse with Marine Oil so it looks brand new! Not an easy task - the oil is messy, sticky and not very much fun especially in the Arizona heat (it was 110 degrees).

We use Penofin and it works great. Usually only have to apply it every 2-3 years. The playhouse gets daily sprinkler spray, so it gets sealed every other year. We have had our cedar patio furniture for 7 years (out in the sun, and California winter rain), and only had to seal them twice so far.

The playhouse looks so good, I'm getting the urge to jazz it up a bit - maybe curtains, or a cute little Girly sign? So many projects - so little time.
No comments: 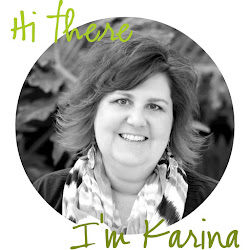 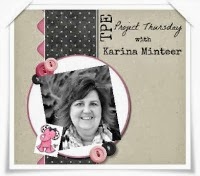